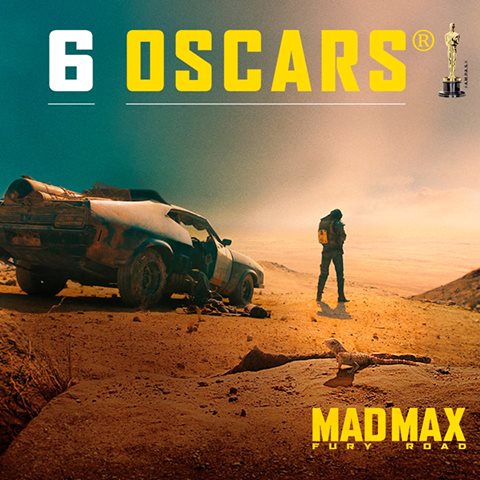 This action–packed movie presented a number of audio challenges, but thanks to DPA’s d:screet™ Miniature Microphones these were easily overcome.
After a wait of 30 years, Mad Max fans are revelling in the release of Mad Max: Fury Road, the fourth in this exceptionally successful action adventure film series starring Tom Hardy, Charlize Theron and Nicholas Hoult, and directed, produced and co-written by George Miller.

Award-winning Production Sound Mixer Ben Osmo chose DPA’s d:screet™ 4063 Miniature Microphones with low sensitivity and low voltage to record dialogue during the shooting of action scenes that involved fast, furious and bumpy chases across the Namibian desert. He also used DPA d:screet™ 4062 Miniature Microphones with extra low sensitivity for cabled recordings of various vehicles, and these were held firm inside each vehicle by DPA magnet mounts.

Osmo, who has won numerous awards for his work, says the choice of DPA microphones was an easy one to make as he had used them many times in the past and always been happy with their durability and their sound quality. DPA Microphones Help Capture the Sound on Mad Max: Fury Road
On Fury Road, vehicle noises often drowned out the dialogue, particularly if actors were in the vehicles or standing near them, so Osmo close miked everyone to get usable guide tracks.

« We used low sensitivity d:screet™ Miniature Microphones for the eight principle cast members who were inside the War Rig cabin and these provided all dialogue and all transmitted sound FX, » he explains. « At the same time we placed a lot of hidden DPA d:screet™ mics in the cabin for FX and for catching the action. We also positioned them around the engine bay, near the exhausts and transmission and up on the top of the War Rig, and they were used in other vehicles and on the vast supporting cast. »

Costume ‘genius’ Andrea Hood was responsible for placing the DPA Miniature Microphones inside the actors’ costumes so they remained invisible.

« She was an immense help because she sewed the mics into costumes and made small pouches on the key costumes, especially those worn by the wives and Furiosa, » Osmo says. « We came up with a couple of interesting positions to place them in Max’s jacket and inside his t-shirt. We couldn’t tape them to his outfit because it was covered in oil and dirt, so Andrea sewed them into the back of his shirt. Location Assistant Brendan Allen and Andrea came up with suggestions of where we could place the DPAs in his jacket and we trialled them all, with me listening for rustle and wind noise. Finally we decided to place two Miniature Mics on each side of his jacket so that when he turned around he would still be on mic. The high wind fluffies were also used and these were instrumental in keeping the wind at bay. » DPA Microphones Help Capture the Sound on Mad Max: Fury Road
Filming an action movie in a place as inhospitable as the Namibian desert did present some issues for the sound equipment, but Osmo got round this by placing most of the hardware in temperature controlled road cases or inside his van. But the radio mic transmitters and DPA and Boom mics were always out in the elements, all being hidden inside costumes or blimps.

« We never lost a mic due to the environmental conditions – they performed very well, » he says. « Overall, the DPA d:screet™ 4063 Miniature Microphones were definitely the best choice for dialogue. I’ve been using them for a few years and they are fantastic. In fact, since finishing Fury Road I have used DPA mics to record two television mini-series in Australia – Return to the Devil’s Playground and The Kettering Incident. Both these projects have required minimal ADR. The feature film, The Sapphires, also had live vocals blended with playback and the mics worked very well at capturing this. »

After his recent hectic film schedule, Ben Osmo is currently happy to be working on TV commercials before he gets started on his next project later this year.