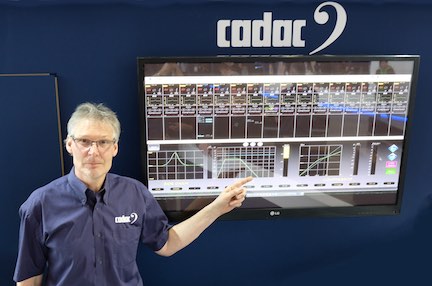 At its Tuesday (5th April) morning press briefing at Prolight+Sound, Cadac unveiled a number of new hardware and software developments for its CDC consoles and MegaCOMMS audio network. These were the CDC MC Optical Bridge, CDC MC AES3 Stagebox and CDC MC Router software application, and CDC Console V3.01 Software. These were all trailed ahead of the press briefing (see hyperlinks below). Previously unannounced was the new CDC six and eight offline editor.

With the ability to edit and save all key operating parameters, and drag and drop capabilities – precisely as on the CDC consoles’ touch screen – it is an essential preparatory tool; facilitating the creation of, and editing and amendment of pre-existing, show files, which can be uploaded to or downloaded from the consoles via a USB key.

Speaking to the importance of the development of the CDC Offline Editor, Sales and Marketing Director Richard Ferriday stated, “Not only is an offline editor an essential preparatory tool for sound engineers, enabling them to create, amend and store their show files for a particular production or venue, it is also facilitates ‘first user experience’, allowing engineers to experience the console interface, before even physically touching one. We believe that experience is something which will encourage a lot of engineers to take a closer look at CDC six and CDC eight.”

CDC Offline Editor is anticipated to launch on the Apple App Store in the third quarter of the year.