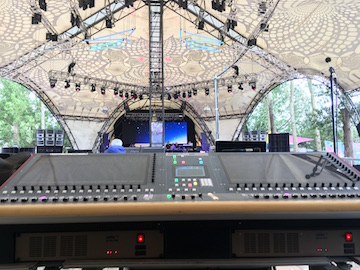 Leading Funktion-One rental house and sound production company, Sound-Services Ltd., worked together with the iconic loudspeaker company to produce the Funktion-One ‘Experimental Ambisonic Soundfield’ for The Glade Stage – the major electronic and

dance music stage – at The Glastonbury Festival. Sound-Services put in a Cadac CDC seven live sound console FOH, for its superb and unrivalled audio performance, allowing the audience to fully appreciate the ambisonic configuration of the Funktion-One Evo system.

The complete CDC seven mix system included a CDC I/O 6448 stagebox and CDC MC Dante Bridge. The 96 input, 56 buss CDC seven features a 36 fader, dual 23.5 inch high contrast HD touch screen hardware control surface. Combined with the CDC OS, this provides Cadac’s uniquely intuitive, “high-agility” swipeable graphical operator experience. The other unrivalled performance feature is the proprietary MegaCOMMS HD audio protocol. With a total through-system propagation delay from on-stage inputs to outputs, including all console processing and A-D / D-A conversions, in 37 samples (@ 96 kHz) – under 400μs – it is the industry’s lowest latency protocol. Additionally, MegaCOMMS synchronizes all audio samples before summing, resulting in absolute phase coherency at all outputs. The resulting sonic performance is audibly superior to any other mixing console (digital or analogue), and described by Sound-Services’ FOH engineers, Flynn McBurney and Danny Cooklin as “out of this world!”

Sound-Services Managing Director, Curtis Gilmore, said, “We were nervous at first about using a brand new desk on a show of this size but after hearing it on a demo, we decided that we couldn’t do without it. The sound is so pure and clear. It is definitely one of the best sounding shows that we have been a part of and the Cadac CDC seven played a huge part in this. We look forward to using this desk at many shows in the future.”